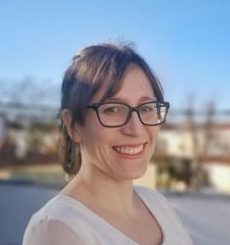 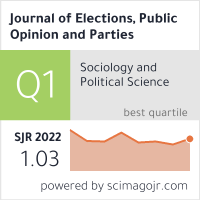 Peer-Reviewed Article
Rosa M. Navarrete
Journal of Elections, Public Opinion and Parties · February 2020
Publication year: 2020
Abstract
Does ideological proximity between the individual and political parties determine electoral participation in regional elections, as much as in national elections? Does the degree of self-rule of a region affect the interplay between ideological distance and turnout? This article addresses these questions and provides empirical evidence drawing upon individual-level and regional-level data from 53 regional elections and 4 national elections in Spain. Results indicate that citizens are more likely to vote when they perceive there is at least one congruent policy option among the party supply, and this happens at both regional and national levels. However, whether the closest party is in national government or whether it is a regionalist organization has a dissimilar impact on turnout in different tiers. This relationship between the type of party which is most ideologically proximate and electoral participation is partially affected by the degree of regional autonomy of the territory.

The End of Ideology? Left-Right and Political Preferences 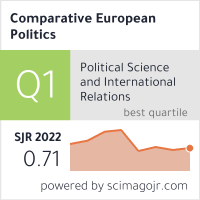 Constitutional courts and citizens’ perceptions of judicial systems in Europe

Peer-Reviewed Article
Rosa M. Navarrete, Pablo José Castillo Ortiz
Comparative European Politics · January 2019
Publication year: 2019
Abstract
In recent decades, constitutional courts have become essential institutions in the political systems of many European countries. At the legal level, constitutional courts are designed as organs intended to protect and enforce the normative constitution. At the political level, they are also expected to play a role in the protection of democratic systems of government and human rights. However, the stability of a democracy does not only depend on efficient institutional designs, but also on acceptable levels of public support for democratic institutions. Using data from the European Social Survey, this article shows that constitutional courts have negative effects on public views of the court system in at least two dimensions: perceptions of judicial independence and perceptions of judicial fairness. These effects, however, decrease with the age of the democratic system. Given the core role that diffuse support for the judiciary plays in the stability of the rule of law in a country, our findings suggest that, paradoxically, constitutional courts might have detrimental effects to the very goal that justifies their existence: the protection of democratic systems of government. 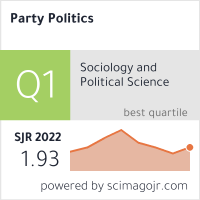 Peer-Reviewed Article
Marc Debus, Rosa M. Navarrete
Party Politics · November 2018
Publication year: 2018
Abstract
Parties have strong incentives to present a relatively cohesive policy position to the voters across different levels of a political system. However, the adoption of inclusive forms of candidate selection methods like primaries could result in the selection of top candidates for elections on the subnational sphere who are not favoured by the party leadership. This is often seen as a threat to high levels of intra-party programmatic cohesion. Because subnational party organizations depend to a significant degree on the support from their national party, we argue that regional party branches that selected their top candidates by means of a primary adopt a policy position that deviates less strongly from the one of their national party. However, candidates selected by primaries might need to be responsive to the preferences of their regional selectorate, so that the incentives for parties at a regional level to deviate substantially from the position of their national party organization could increase. By analysing the content of 150 regional election manifestos of Spanish parties, we find that if a party’s top candidate for a regional election is selected in a primary, then the policy distance between the respective regional and national party decreases. However, this effect is not observable for recently founded parties.

Do regional primaries affect the ideological congruence of political parties?

The Politicisation of social divisions

This paper examines the impact of economic crisis on some relevant political attitudes towards democracy in Spain, and its consequences in terms of support to established and to new, emerging parties. We have selected three attitudes: democratic legitimacy or support for democracy, political and economic discontent or dissatisfaction with the way democracy works, and political disaffection. Concerning economic system, we have chosen the legitimacy, the efficacy, and the fairness of Capitalism. Democratic legitimacy and satisfaction with the performance of democracy proved to have an impact on the citizens’ disaffection from the political system, as unemployment and opinions on legitimacy, efficacy, and fairness of capitalism also had. Finally, attending to electoral consequences, the paper illustrates how, in moments of economic and political crises, dissatisfaction –but not disaffection– is directly related to the increasing voting intention enjoyed by Podemos, a populist left-wing new party, and to the probability of a serious disruption of the Spanish party system.

We use cookies and similar tracking technologies to track the activity on our website and hold certain information.

Cookies are files with small amount of data which may include an anonymous unique identifier. Cookies are sent to your browser from a website and stored on your device. Tracking technologies also used are beacons, tags, and scripts to collect and track information and to improve and analyze our website.

You can instruct your browser to refuse all cookies or to indicate when a cookie is being sent. However, if you do not accept cookies, you may not be able to use some portions of our website.

Google Analytics is a web analytics service offered by Google that tracks and reports website traffic. Google uses the data collected to track and monitor the use of our website. This data is shared with other Google services. Google may use the collected data to contextualize and personalize the ads of its own advertising network.

The embedded videos are mainly from You Tube and you can find more details on their Privacy Policy.